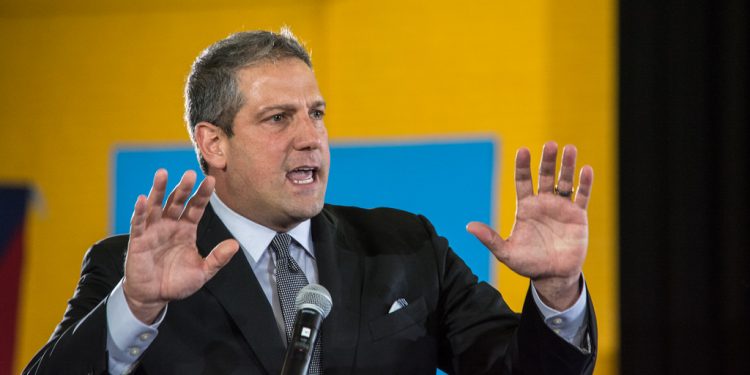 Democrat Congressman Tim Ryan (D-OH) made an impassioned defense of the GOP’s tax reform push, saying that “we need to lower the corporate tax rate” & “we need to simplify the tax code.”

A Congressman w/ the last name Ryan was on Morning Joe and said that “we need to lower the corporate tax rate” & “we need to simplify the tax code.”

No, it wasn’t Paul Ryan. It was Ohio Democrat Tim Ryan who made an impassioned case in support of legislation that Republicans have taken the lead on. Now, all Democrats need to be asked if they agree w/ their colleague that it’s time for their party to join the GOP in pursuing tax reform:

REPRESENTATIVE TIM RYAN: But let me be clear, I don’t think we can be hostile to business. I think, you know, while we can be for a progressive tax code, we can be for an increase in dividends and corporate – other kinds of business taxes – I think we need to simplify the tax code, I think we need to lower the corporate tax rate. We can’t just be the party of redistribution of wealth, we’ve got to be the party of creation of wealth, and not just in Silicon Valley and Wall Street – In Youngstown, in the South – we have to create new wealth in this economy and I really want the Democrats to be the party that’s going to get their arms around this big issue.

For context, here’s what the other Ryan (The Speaker) said about the need to pass tax reform yesterday. He’ll be speaking about the issue again later today at Boeing’s HQ in Everett, Washington.

SPEAKER RYAN: Here’s our issue. Right now, we tax companies like this at 35%. That’s about 20% of American businesses. 80% of American businesses, many of your suppliers, probably some of your contractors here, they pay their taxes as individuals – we call them “pass-throughs” like subchapter “s” corporations or LLCs – their top effective tax rate is 44.6%. So, our competitors to the north – I come from Wisconsin – our competitors to the north, Canada, they tax their businesses at 15%. Ireland, you have a lot of Irish here – 12.5%. Technology tax rates on companies, I was just informed this morning, in Israel – 6%. China: 25%, but they actually give you a break in the early years. We’re between 35 and 45% on how we tax American businesses. And so one of the big, great problems we have is we’re basically taxing American businesses out of America. We’re making it really hard for American businesses to compete and succeed in the global economy because of our tax system.

What’s worse, is if we’re successful, like Intel clearly is, in being a global company and making money by selling goods and services overseas, they can’t bring those profits back into this country and reinvest it in jobs and manufacturing in America for many reasons, but chief among them is because of our tax code. So we have $2-$3 trillion of American profits parked oversees that can’t come back to be reinvested in our communities because of our tax laws. So got to get these tax rates down. The average tax rate on companies in the world is 22.5% and when we’re taxing American businesses 35-45%, that makes us very, very uncompetitive. And so we’re convinced that if we get our tax rates down on all of our businesses, small businesses, big and everything in-between, then we can be far more globally competitive and we can make it make more sense to keep our companies based in America.

What does that mean? That means our headquarters stay here and when our headquarters stay here, that means the affinity and the attachment to the community stays here. That means the Boys & Girls club gets more funding, that means United Way and local churches and charities get more community support like clearly you do here in Portland. And so there are lots of reasons why we want to make sure that American companies stay in America, but we also want American companies to be able to make things here and export them all around the world.