CNBC: “That marked the slowest GDP gain since the 31.2% plunge in the second quarter of 2020, which encompassed the period during which Covid-19 morphed into a global pandemic that resulted in a severe economic shutdown that sent tens of millions to the unemployment lines and put a chokehold on activity across the country.”

The supply chain crisis currently gripping the nation played a role in the lower than expected growth numbers.

CNBC: “The July-to-September period saw a major clogging of the nation’s supply chain, which in turn dampened a recovery that began in April 2020 following the shortest but steepest recession in U.S. history.”

The economy is also facing headwinds from a labor shortage gripping the country as a result of the enhanced unemployment benefits that existed during the pandemic.

CNBC: “Shortages in labor and soaring demand for goods over services contributed to the bottleneck, which is not expected to ease until after the holiday season.”

CNBC: “Companies during the current earnings season have noted the issues with supply chains, but many say customers are willing to pay higher prices. That in turn has helped fuel inflation, which is running close to its 30-year high and also is expected by most economists and Federal Reserve policymakers to cool next year.

“Thursday’s data indicated that at least the pace of the inflation rise had taken a step back.

“Core personal consumption expenditures, which exclude food and energy and are the preferred gauge by which the Fed measures inflation, rose 4.5%, a deceleration from the second quarter’s 6.1% increase but still well above the pre-Covid pace. The headline PCE price index increased 5.3% in Q3, down from 6.5% in the previous period.”

One thing that hasn’t shown a slow down in prices increases: gas. Gas prices are sugaring across the country and have put some consumers in California in the position to choose between gas and groceries. 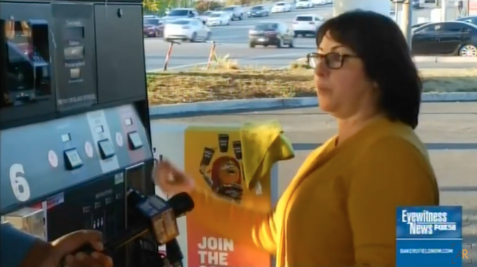 B​​ottom Line: The economy has ground to a crawl as supply chains plug up, inflation rises, and labor shortages persist throughout the country. Inflation is in danger of going into hyperdrive as congressional Democrats are considering a massive tax and spending plan to inject even more money into the economy, while not addressing the labor shortage or supply chain disruptions.