Tax Plan Gains Momentum As Far-Left Tries To Derail It… 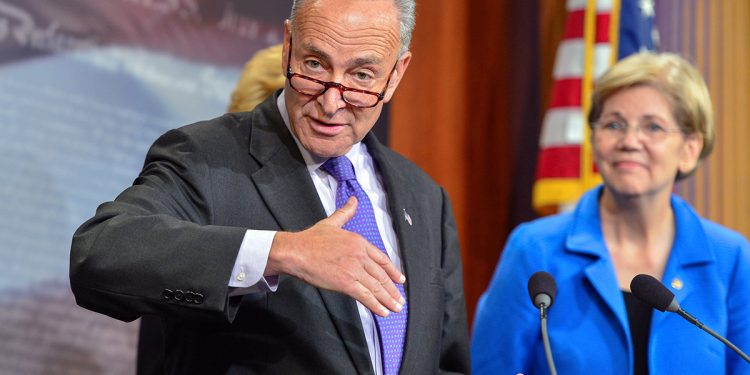 While the legislation hasn’t even been written yet, the opposition from these extremists will likely focus on a phony study from the left-leaning Tax Policy Center that has been slammed for its irresponsibility, with the CEA Chairman calling it “fiction” and “indefensible.” That criticism mounted today w/ a new Wall Street Journal piece from two economists noting how TPC’s models did not “simulate how the GOP plan would draw investment to the U.S.”

On top of that, two leading Senate Democrats have come out in recent days and said that they want to get on board w/ the President’s plan if it helps working families. Given the report from the Council of Economic Advisers yesterday that, conservatively, this plan would save $4,000/year for the average American family, Democrats have no good excuse to obstruct this push.

SEN. JOE MANCHIN: I want to work with the President, absolutely, a lot of Democrats, including Chuck Schumer, we’ve talked about that. We’ll work with him and sit down and find a pathway forward. I want to reduce the corporate tax, I want a territorial system, I want a system that works fairer, that on pass-throughs and capital gains, and gets rid of carried interest and things that basically should be thrown out that benefit only the one percent, or the one-tenth of one percent.

STEVE DOOCY: I have read a couple of the bills that you actually support, and it sounds like you and Donald Trump are on the same page?

SEN. SHERROD BROWN: Well, I read his Forbes interview, I think last week, and part of his speech last night, I listened to what his daughter says, and listen, the President wants to do two things: he wants to give significant tax relief to working families and he wants to make sure that corporations are patriotic, that corporations actually pay decent wages and keep their jobs in the country.

BOTTOM LINE: The individuals speaking at CAP this morning would oppose any plan put forward by President Trump and congressional Republicans. Their claims about this being only a handout for the wealthy simply aren’t true, and demonizing this approach only hurts the middle class Americans that are desperate for the tax relief that this framework would bring them.
photo courtesy of Atlantic Sentinel