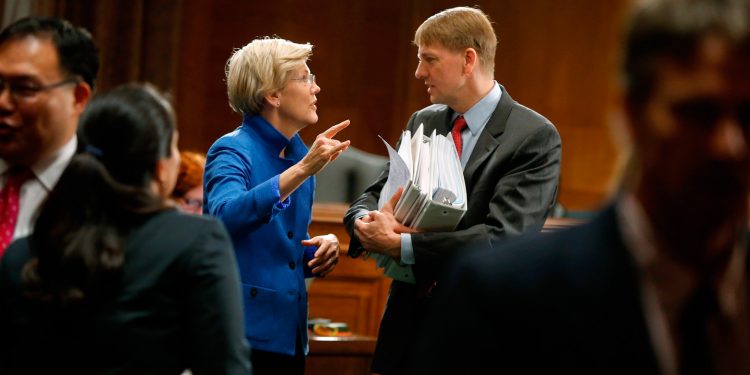 As Kurtz notes, CBS interviewed four professors to defend Cordray and the Bureau, but failed to note that all four had previous ties to the CFPB, either working as a part of the agency or serving on its advisory board. Watch the story below to see how the network mislead viewers to paint a rosy picture of the CFPB:

HOWARD KURTZ: A CBS Sunday Morning segment on the Director of the Consumer Financial Protection Board, created under President Obama, was extremely sympathetic.

ERIN MORIARTY (CLIP): Richard Cordray may be the best friend that the consumer has ever had.

KURTZ: CBS interviewed Republican Congressman Jeb Hensarling whose bill curbing the agency’s powers has passed the House. Asked him about a letter of opposition from more than 150 professors and then showed some of them laughing at the interview.

MORIARTY (CLIP): Are all of those professors wrong?

MORIARTY (CLIP): They are? They are all wrong?

CHRISTOPHER PETERSON (CLIP): It seems to me that Chairman Henserling believes in freedom but only for big banks and financial institutions.

PATRICIA McCOY (CLIP): Even the Choice Act would not abolish the Bureau. Instead it would just leave it an empty husk.

KURTZ: What the program neglected to disclose is that all four professors worked for or with the Consumer Protection Bureau during the Obama Administration, either on staff or on its consumer advisory board. These weren’t independent experts, they all had ties to the Board they were defending. CBS declined to comment but after my inquiry posted this Editor’s Note to an online write-up on the story. “Some members of the panel of college professors and consumer advocates featured in this report also have previous work experience with or have served on advisory boards for the Consumer Financial Protection Bureau.” A good step, but there was no indication it had been left out in the first place.

Image courtesy of The Nation