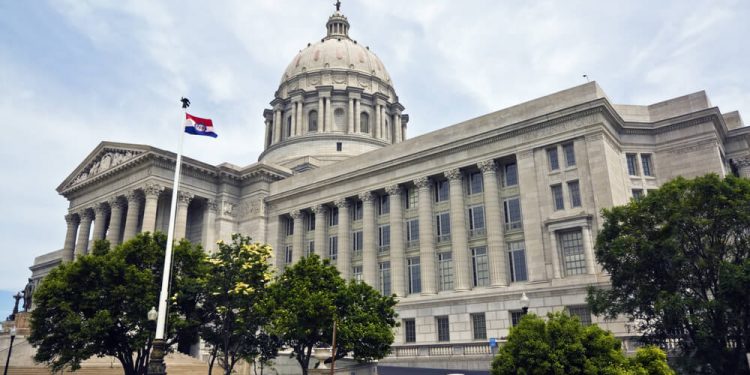 As out-of-state forces flood into Missouri to try & help big labor bosses overturn job-creating Right To Work legislation with a petition drive, an article from The Missouri Times uncovers a slew of disturbing information about their effort.

As out-of-state forces flood into Missouri to try & help big labor bosses overturn job-creating Right To Work legislation w/ a petition drive today, an article from The Missouri Times uncovers a slew of disturbing information about their effort.

See the piece below for details on how these union groups have funneled money outside Missouri & one group, inaptly called “We Are Missouri,” has spent less than 8% of their expenditures within the state.

JEFFERSON CITY, Mo. – As the day grows nearer before Missouri’s new right-to-work law takes effect, tension continues to rise as opponents of the conservative movement continue pushing forward with their plan to gather signatures in an effort to put a referendum on the ballot to repeal the law.

Several anti-RTW groups have led the effort to block the new law, including groups like “We Are Missouri” and “Preserve Middle Class America,” the latter of which is hosting a petition drive across the Show-Me State to gather more signatures.

But while the anti-RTW groups finalize their efforts to get needed signatures to put the referendum on the ballot, they’re also being accused of heavy-handed and unethical tactics being used to gather signatures.

But the accusations do not stop there. The right-to-work supporters are also calling the petitioning groups out for being secretive union-front groups and point to their finances as proof.

Missouri Rising is a state branch of has been a strong proponent and advocate for right-to-work in the Show-Me State, and they say that the two groups have funneled over $600,000 into an out-of-state group to collect signatures to block the law from going into effect, as records with the Missouri Ethics Commission show.

That company, FieldWorks, LLC, is a Washington, D.C. firm that focuses on campaigns and ballot initiatives.

Missouri Rising says We Are Missouri is really just a front for the Missouri AFL-CIO and Preserve Middle Class America is a front for the Teamsters, and that both groups claim to be a coalition of grassroots activists leading the fight against right-to-work laws in Missouri. They say it seems ironic that We Are Missouri would put the bulk of its funds into a D.C. group, and questions whether they’re really a “grassroots” group of Missouri-based activists, as they have apparently only spent 7.7 percent of their expenditures in Missouri.

Missouri Rising spokesman Jeremy Adler says that this kind of effort from these groups shows that these are really “traditional left-wing operatives that are outsourcing their campaign activities to non-Missouri entities.”

Swinford acknowledged the work with a firm on the initiative petition, noting there’s nothing wrong or illegal about doing so. The use is also not uncommon for IP campaigns.

“We do work with a national firm that specializes in these large initiative campaigns, and that’s a common occurrence. We have a huge volunteer effort, and because of that, we needed to hire an experienced and professional firm to handle it all,” she said.

As for whether the signatures needed will be there by the Aug. 28 deadline, Swinford says they’re pretty certain of it.

“We have full confidence that we’re going to make it to the ballot.”

Reports have shared the campaign plans to turn is 150% of needed signatures for all 8 congressional districts. If successful, it will be one of the only campaigns to succeed. Generally, campaigns prioritize signature gathering in 6 of the 8, which is the minimum required.