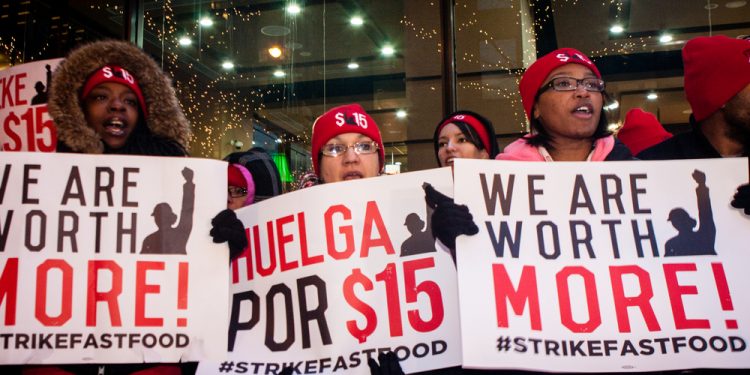 Yesterday’s study from the University of Washington unsurprisingly showed that the minimum wage hike in Seattle was actually hurting the workers it was designed to help, just as many predicted. Instead of accepting this report, which MIT economics professor David Autor called “very credible,” the ‘Fight For 15’ movement sought to discredit it with absurd arguments that have no basis in fact.

In attempts to raise flags about this report, the ‘Fight For 15’ claimed that the group conducting it was “conservative-funded,” which makes absolutely no sense since this is the same team that the City of Seattle is paying to conduct these studies.

The City of Seattle passed its $15 minimum wage ordinance in June of 2014, and that December commissioned the UW team to conduct a five-year study of the law’s impacts.

On top of that, UW acknowledges that their study was funded by the City of Seattle, as well as a number of foundations including the Russell Sage Foundation which typically is viewed as having a more liberal bent.

We thank the Laura and John Arnold Foundation, the Smith Richardson Foundation, the Russell Sage Foundation, and the City of Seattle for funding and supporting the Seattle Minimum Wage Study. The Evans School of Public Policy and Governance provided financial and administrative support. Partial support for this study came from a Eunice Kennedy Shriver National Institute of Child Health and Human Development research infrastructure grant, R24 HD042828, to the Center for Studies in Demography & Ecology at the University of Washington

That doesn’t jive with their claims about so-called conservative funding. Additionally, they argue that the authors of the study are supposedly “right-wing,” but one of the authors is actually a Senior Research Assistant at the Economic Policy Institute, a group that has an obvious liberal bias and is controlled by Big Labor at its highest levels.

Finally, to push back against this credible study, they use information from Michael Reich and others at UC-Berkeley. Remember, the study conducted by the Institute at Berkeley last week was heavily criticized for having a blatant partisan agenda and Professor Reich is a well-known advocate for minimum wage hikes. On top of that, Seattle Weekly connected some dots to show that the Seattle Mayor’s office colluded with the Institute at Berkeley to concoct this favorable study after they knew that University of Washington’s report would not have the results they wanted.

To review, the timeline seems to have gone like this: The UW shares with City Hall an early draft of its study showing the minimum wage law is hurting the workers it was meant to help; the mayor’s office shares the study with researchers known to be sympathetic toward minimum wage laws, asking for feedback; those researchers release a report that’s high on Seattle’s minimum wage law just a week before the negative report comes out.

It’s embarrassing that the ‘Fight For 15’ would try to discredit a non-partisan and credible study using untrue facts and citing a report that is unmistakably partisan. They’re clearly panicking since UW’s study shows what most have known all-along: minimum wage hikes don’t help employees and the push from the ‘Fight For 15’ movement only does damage to workers that they claim they want to help.