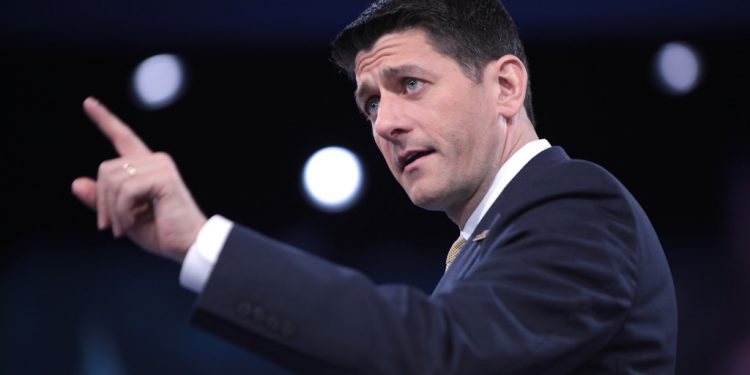 Paul Ryan held a town hall with employees at America’s largest factory, Boeing, and answered one worker’s question by explaining how tax reform will incentivize companies to manufacture & produce more goods in America

Paul Ryan held a town hall with employees at America’s largest factory, Boeing, and answered one worker’s question by explaining how tax reform will incentivize companies to manufacture & produce more goods in America:

BOEING EMPLOYEE: Alright, so if we pass these reforms, how do we ensure that the monies created stay within the communities and within America, as opposed to going to shareholders or jobs being shipped overseas?

SPEAKER PAUL RYAN: Yeah, so first I’d say, right now it’s so bad that the money that we make in companies, in many cases, stay overseas, they don’t even come here. I was at Intel yesterday. Intel, 50,000 employees in America, 19,000 in Oregon alone and Intel, they ran the numbers for us, they told me that because of the U.S. tax code, each one of their factories, they would save $2 billion in taxes alone, per factory over 10 years, if they move it overseas. So, right now we’re basically telling American businesses, don’t make stuff in America because the taxes will hurt you. You’re better of manufacturing overseas and importing it into the country under our current tax code. So what we’re trying to do is just completely remove that disincentive, get our taxes at or above the international average tax rate, and make the incentive the other way around. We want to encourage, we call it capital expenditure. All this that you do in here is capital expenditure, you do $6 billion a year in R & D and CapEx.

BOEING CEO DENNIS MUILENBURG: You got it, yep.

SPEAKER RYAN: So we want more businesses to do that so that the closest answer I can give you is that, take your money and put it in your people, put it in your factories, buy more equipment, you know, switch to composite from metal, and you can write that off your taxes. That means, don’t put it into shareholders, don’t put it into this, that, put it into factories, put it into American businesses, hire more workers, you’ll get a better deal on your taxes. We don’t have that right now, to any extent, and that’s what we’re trying to do, we’re trying to reverse the incentive so that it makes money, it makes sense to make things in America and export them overseas.

Later in the day, The Speaker explained to CNBC in an interview about how the current system continues to be “a big drag on growth in America,” which is why Congress will aggressively try to pass tax reform:

YLAN MUI: All the time that is spent though on this funding fight, on the debt ceiling negotiations, that’s less time available for talking about tax reform…

SPEAKER RYAN: Yes there is.
MUI: You keep saying that, markets are skeptical.

SPEAKER RYAN: We can walk and chew gum at the same time. Look, here’s what I’m doing on tax reform. I’m criss-crossing the country this month talking about tax reform. I was, last month I was at New Balance in Massachusetts, I was at Miller Brewing in Milwaukee, National Association of Manufacturers in D.C. We were, yesterday, in Portland with Intel, today, here at Boeing, talking with the American people about the need to reform the tax system. We haven’t done it since 1986. It is a big drag on growth in America, we all know this. I’ve been working on this, literally, pretty much my adult life, tax reform. So this is something we’re all in on, we’re solely focused on it and our tax writers, the Ways And Means Committee, the Finance Committee, are deep into the details producing the bill. And yes, those of us who are leaders, we can multitask, we can work on funding, we can work on debt limit, while the committee of jurisdiction works on getting this tax bill ready. So that’s just the way Congress works, lots of committees, lots of pots on the stove, and we can get these things done, and yes, we can stick the landing, no pun intended, on tax reform this calendar year.